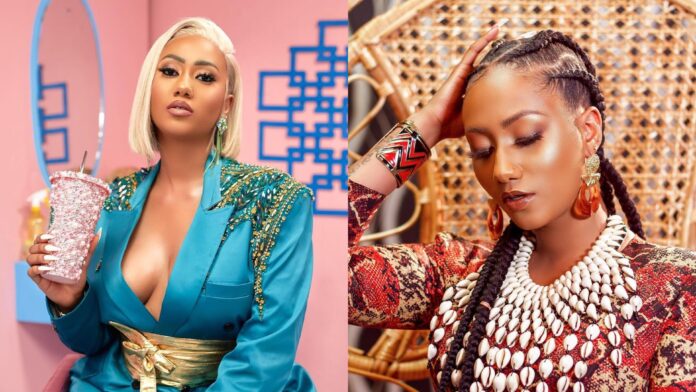 Even before she announced her “dream” of trying music, she succeeded in carving a name for herself. Almost every “new school” person on social media might have heard of the name “Hajia4Real”.

Save some other issues about her I wouldn’t want to delve into for those are her personal life issues. Mona aka Hajia4Real comes to mind when it comes to Ghanaian socialite living lavish lifestyle and making the headlines even when she was ideally not a “Celebrity”.

With Shatta Wale mentioning her name in his songs a couple of times including other artistes, you don’t need a soothsayer to tell you that Hajia4Real has strong links with the top entertainers in the country. She seem to have that good connection with well known musicians in the country and a glance through her Instagram page even before she released her first song in November 2020 shows, she had those connections years back.

I never followed her or what she does as a socialite but when I heard news that she had released a song dubbed “Badder Than” and was largely trolled on social media, I was left with no choice than to skim through YouTube to be sure if the trolls I have seen on social media about her decision to sing is grounded on legit grounds or just the usual everyday trends where people are fixated in making an issue out of no issue.

She admitted in a recent interview that it took her years of deciding if she should pursue a career in music. After traveling to some enviable places and driving some luxurious cars and living a lavish lifestyle, I doubt if her quest to do music now is because she want to make money. Perhaps she just want to do something she had always wanted to do years back but never had the courage till recently or she want to cement her place in the book of “Celebrities” by not only been popular on Instagram and other social media platforms.

In that particular interview, Mona 4Reall said in all the years of contemplation, she used to ask what people will think or feel about her choice to become a musician until she finally decided that well, “people’s opinion should remain people’s opinion for I will do what I gotto do”

So truly on 27th November 2020, while Coronavirus never forgave the world and Ghana, she released visuals for her first single “Badder Than”. Trust me I saw some “mean” comments which says her song was yet another virus meant to kill people. I’m holding myself from not laughing with this one.

I believe with respect to her lyrics in her two songs released so far that are “Badder Than and Fine Girl” she could have done better, knowing how connected she seem to be with other top musicians and the fact that the “Badder Than” was produced by popular prouder MOG. The “Fine Girl” track has the rhythm of Shatta Wale’s “My Level” banger and that is understandable because with someone who have that close connection with the “SM” boss, it’s only natural she “steals” some of his rhythms in announcing herself.
I cannot pin her down to her inability to come out with compelling lyrics because I believe if she’s a smart learner with time, her content will be great.

Save that, Mona 4Reall or Hajia4Real is coming into the music space with something we must pay attention to which is the quality of her videos and what goes into the production of those videos. She has decided to make good use of her resource, link with top “private” citizens and whatever connections she have in the industry to produce breath taking videos. You watch her first two videos directed by “Rex” and you can’t help but appreciate the crafts, resources and props that went into the production and how great those videos looks.

One thing that has always been against Ghanaian music and its progress is the quality of our music videos. I don’t buy into the idea of traveling to South Africa or Dubai to shoot music videos for I believe we have equally great locations here in Ghana to give that elite taste to any Ghanaian origin video. Traveling to South Africa or Dubai does not give your video a great appeal.

Many of our musicians whose videos were shot in these above mentioned locations don’t even get the opportunity to explore locations, they are always confined in some small space and later come to run their mouth that “oh I produced my video in Dubai” even when it’s not appealing.
Our music videos hardly make it to the international platforms because they don’t meet certain specifications or standards.

Mona 4Reall with the resources available to her is making some great videos as a new Artiste. It may not Always be about the resources because even with all the monies and exposure Sarkodie, Shatta Wale, and Stonebwoy still produces some mediocre music videos which shouldn’t be the case.

A music video I believe is just like any other good film, should have a theme and must tell a particular story which is sync to the lyrics of the songs.
With Mona’s “Badder Than”, the theme and lyrics of the songs even though they lyrics are not extremely rich tells a great story.
There is a verse in there which says “If I Pull up in a car, I’m the owner”
Equating these to the few luxury cars displayed in the video proves the director knows what exactly he was about.

The costume and general props in her videos have been wonderful.
With the video bagging a million view just after 2 months of release shows Mona 4Reall is not here to joke as she meant business.

The “Fine Girl” Which is her second video is having close to 400k views on YouTube after 2 weeks of release. These numbers are higher than the numbers some “Top” musicians who have been in the music space for years gets on their videos.

You can make the argument that there is readily available money she is using for these great videos she has made so far which many Ghanaian musicians don’t have access to.
Exactly the point here, I think the time has come for our musicians and their management to understand that music video plays an important role in making up an artiste.

As such, everything should be put in place in making sure whatever video an artiste produces will stand the test of time.
You watch most Ghanaian music videos shot just a decade ago and you ask yourself the type of camera used in shooting those videos but compare them to other foreign videos shot within that time frame and their pictures still look great.

So yes, you can question if Mona 4Reall has got the real talent in becoming a better musician but trust me she has got a solid foundation to have a song with almost all our Grade “A” artiste and even those in Nigeria.

She has identified her strength in this journey of becoming a musician and she is making good use of that by making sure her videos and top notch.
While the trolls continues, it will surprise you that she is likely to win an award wit her videos even when the lyrics is not that rich.

So far so good for her and we can only expect she gets better with her lyrics.

Enjoy Her “Fine Girl” Below;